Boston Premier of “Backpack Full of Cash” is a Huge Hit!

DEY’s Senior Advisor, Nancy Carlsson-Paige, and her son, Matt Damon, participated in the recent screening of Backpack Full of Cash. The film explores the growing privatization of public schools and the resulting impact on America’s most vulnerable children. Filmed in Philadelphia, New Orleans, Nashville and other cities, it takes viewers through the tumultuous 2013-14 school year, exposing the world of education “reform” where public education – starved of resources and awash in standardized testing – hangs in the balance.

The Boston premier screening, sponsored by Citizens for Public Schools,, Campaign for a Commercial Free Childhood,  and Defending the Early Years, was was shown to a capacity audience at the Wheelock College Family Theater on September 13. After the film, there was a roundtable discussion, featuring Dr. Carlsson-Paige, Damon (a product of the Boston Public Schools), CCFC’s Josh Golin, and Boston Teachers’ Union President, Jessica Tang, and Boston student activist, Luis Navarro.

To host a screening at your school, organization, or community, click here. 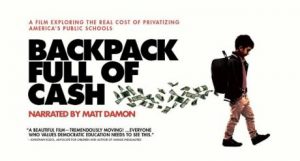 It’s nice to know that there are still films that features this kind of stories. Viewers will be enlightened about the events that are really happening in the world. Reality check, this is what its called. We must address the problems that the country is facing, such as privatization, as soon as we can. We must not turn a blind eye on this kind of situations. Thanks for uplifting the human spirit by sharing this motivational films with us.

car title loans in los angeles
Log in to Reply

Positive site, where did u come up with the information on this posting? I’m pleased I discovered it though, ill be checking back soon to find out what additional posts you include.

Great survey, I’m sure you’re getting a great response.

This article gives the light in which we can observe the reality. This is very nice one and gives indepth information. Thanks for this nice article.